The Role and Relevance of Population Biobanks in Clinical Research 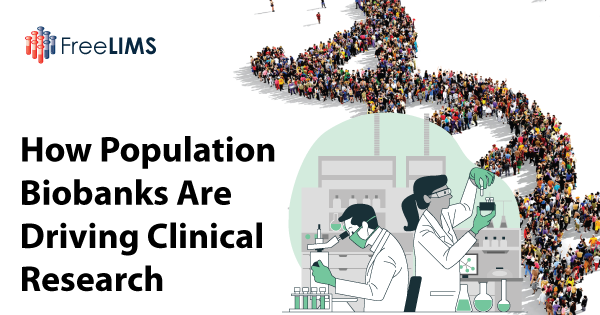 Scientists are only beginning to understand the multifactorial nature of diseases, but with large-scale biobanking, it may be just a matter of time before the dots connect. Genomics is paving the way for precision medicine and suitable treatment options for rare and difficult-to-treat conditions. This calls for large population-based biorepositories reflecting gene-gene and gene-environment interactions over time. If any success is to be achieved, there's a need for international collaboration to achieve the required statistical power. This blog discusses the need and relevance of population biobanks as key drivers of clinical research in the future.

What is a Population Biobank?

A population biobank is best described as donations of thousands of biological specimens collected from members of the general population who might or might not be suffering from any disease. Most of these biological specimens are genetic material. However, a population biobank should not be confused with a genetic biobank which is a biorepository that only handles DNA material in order to understand the genetic determinants of disease, regardless of whether the samples were collected from the general population or not.

Population biobanks play a major role in identifying and analyzing genetic susceptibility to diseases and how lifestyle and environmental factors contribute to diseases. Population biobanks facilitate this by enabling researchers to analyze molecular data as well as the associated data such as clinical, imaging, and lab reports. A number of countries are already in the process of setting up population biobanks.

The Human Genome Project Laid The Foundation for Population Biobanks

The highly acclaimed Human Genome Project provided the stage for major breakthroughs in precision medicine, having successfully managed to sequence the entire human genome. This scientific miracle made it possible for researchers to begin to explore the link between genetics, disease, and response to treatment. However, translating this preliminary understanding into clinical benefits remains a challenge. A population-based approach to biobanking will give scientists multiple, varied and unbiased samples that will allow them to explore complex disease susceptibility genes.

Population biobanks play host to millions of genetic material as well as the related lifestyle, environmental, and clinical information. Researchers are able to analyze all this information and identify multifactorial causes of disease. This may provide breakthroughs in the treatment of chronic diseases such as Alzheimer's, schizophrenia, cancer, diabetes, and asthma among others. This may also help scientists to establish triggers for adverse outcomes such as congenital birth defects and preterm births.

Population Biobanks Can be Used to Estimate Allele Frequency

Because of the diversity of varied specimens (from a large cross-section of participants from different ethnicities) in population biobanks, researchers are able to estimate allele frequency. This is the proportion of people in a population with a specific gene frequency that is instrumental in understanding the interplay between genetic and environmental factors and disease causation.

In spite of major breakthroughs in genomics, their translation into clinical benefits has remained a mirage. Population biobanks are however promising to translate discoveries at the genetic level into a better understanding of complex diseases and hence the discovery of new and better drugs. What has been discovered from genomics so far has not been sufficient to alter current recommendations for patient care unless on a case-by-case basis. Research driven by population-based biobanking will bridge this gap and allow scientists to exploit the interplay between genetics and environmental risk factors for diseases. This research is needed not only for drug development but also for devising disease prevention strategies as well.

Role of a Biospecimen Management System in Population Biobanks

How Population Biobanks Can Shape the Future of Clinical Research

The world is at an unprecedented time with the evolution of -omics and precision-driven medicine. However, translational research remains elusive. Population-based biobanks store large volumes of biosamples harnessed from the general population. Population biobanks enable researchers to analyze genetic biomarkers in relation to medical history and environmental factors. They go a step further to offer information about allele and gene frequency in a population. The integration of population-based genomics with modern biobanking will provide scientists with the rare opportunity to tackle rare and complex diseases right at the genetic level. A biospecimen management system streamlines and automates operations of population biobanks, helps them overcome regulatory challenges, and assures data security at all times.